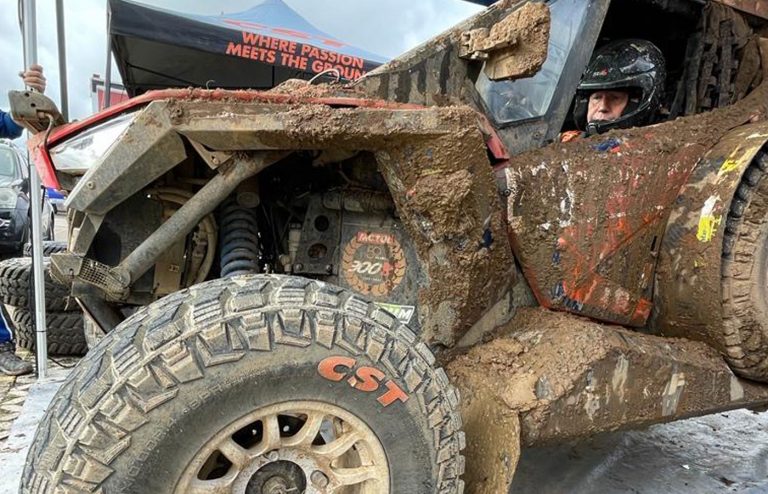 Baja Portalegre 500 (October 28-30) is a classic appointment that attracted an impressive field of 65 competitors across all four categories. Fifth round of the FIA European Cup, the competition, that this year celebrated its 35th anniversary, featured an intense route with four selective sections over gravel tracks in the east of central Portugal for a total distance of 663 km (410km of selective session).

At the start also Graham Knight and David Watson of the French Xtremeplus, synonymous of Polaris on the race field in Europe, Africa, Asia and Middle East. The British crew faced the Portuguese adventure with the same enthusiasm and passion that have characterized all their racing career.

This year edition of the Baja Portallegre was affected by the bad weather: after a dry prologue, from Friday afternoon it started to rain and it never stopped. Two days of torrential rain that saw the tracks turning into rivers.

“Logistically it was quite a challenge to race in Portugal after 10 days of the Rally du Maroc”, stated Marco Piana, Xtremeplus Team owner. “It was impressive to see Graham Knight and David Warson to compete in the Baja Portalegre with such extreme weather conditions. Aged 70, Graham drove 600 kms under the rain. On Saturday morning, 60 competitors took the start. After 13 hour-drive, only 37 crossed the finish line. Knight and Watson with their Polaris equipped with CST Apache tyres were among them. A success. “We were also very satisfied of the performance of the Polaris Pro XP prepared by our technicians. In 400km-long stage they never stopped once. It was a magnificent proof of how robust and reliable these vehicles are”, continued Marco Piana.

“We are from England, but we never saw such a torrential rain. There was lots of mud and water everywhere, and it was very demanding in terms of visibility and grip. We were lucky because we had the windscreen, but I don’t want to think what a drive has been for those racers competing in a Polaris without windscreen. Our Polaris proved to be very robust and reliable and our CST Apache tyres found the grip where there was almost none. Despite two days of torrential rain we made it! Mission accomplished”, stated Graham Knight. “I feel sorry for the Organizers because Baja Portalegre is an amazing appointment. The location is beautiful with a coloured countryside, olive trees and vineyards. We were staying in a lavender farm and it was simply beautiful”.

Despite the rain, thousands of spectators followed the race. “The passion here is amazing. It was fantastic to see so many fans were cheering us up till it was dark. This was a great reward all along the stage and at the finish line where we arrived after 13 hour-drive completely covered in mud”, continued Knight.

For the Xtremeplus team it’s not the time to relax. Next week the French squad will face a double commitment: they will line up 2 vehicles (Andrea Tronconi and Roberto Tonetti) on the Tunisia Desert Challenge and in the same days Xtremeplus will compete in the Abu Dhabi Desert Challenge where Jose Luis Campo and Rafael Tornabell will fight for the 3rdoverall position in the FIA World cup Cross country, and Liam Griffin.