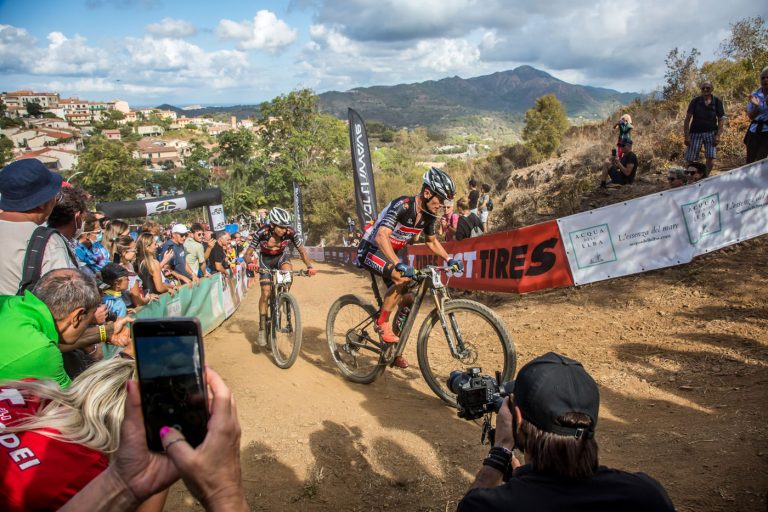 We are proud to say that we were sponsor in the 2021 UCI Marathon Championship in Elba, Italy. It became one of the toughest and most spectacular world championships in history. We complement the winners who were Mona Mitterwallner and Andreas Seewald.

At 8:30 the departure of the men, with 118 athletes at the start, representing 27 nations.
At 8:40 it was the turn of the women, with 55 athletes from 22 nations.
115 km with 4,700 meters of elevation gain for men, over three laps, 85 km with 3,200 meters of elevation gain for women, over two laps. Two breathless races, a very long cross country.
The multi-lap formula certainly proved to be spot on. It also made the marathon discipline highly spectacular, which is normally penalized by long waiting times. Those who were in Capoliveri were able to witness many passages of the athletes, with limited movements.

The men’s race saw an initial breakaway by Andri Frischknecht, the son of Thomas, winner of the first title of the XCM discipline in Lugano, back in 2003. After his escape, the lead was taken by the European champion, the German Andreas Seewald, who attempted a solitary escape. After about an hour, a group returned to him, which also included Nino Schurter, Arias Cuervo and two Italians, Fabian Rabensteiner and Juri Ragnoli.

Ragnoli, Schurter and Rabensteiner detach themselves from the lead of the race which, in the final kilometers, turns into a three-way fight between Seewald, Arias Cuervo and Dias.The German pushes hard and only Arias Cuervo manages to worry him, while Dias is content to administer the third position. After 6 hours 2 minutes and three seconds Seewald crosses the finish line, welcomed by an incredible crowd. Arias Cuervo closes in second position and Dias completes the podium of a stellar race.

The women’s race crowned an immense talent in mountain biking. The very young Austrian Mona Mitterwallner, born in 2002, after the XCO Under23 world title, also won the absolute XCM title. The young Austrian talent preceded, the Polish Maja Wloszczowska, in her last career race which she who had won back in 2003, when Mitterwallner was only one year old.