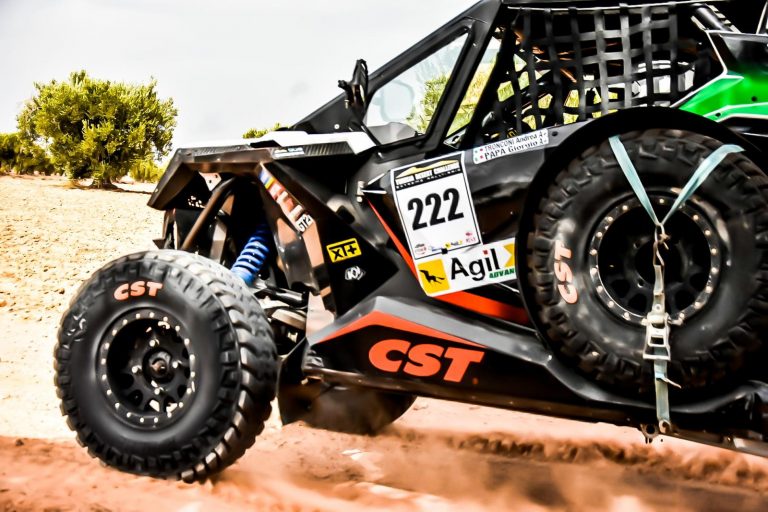 The hugs, the laughter and a rainbow of memories of eight days of intense days in the Tunisian desert. This is why we love our sport. “We made it”, said a satisfied Checco Tonetti crossing in 4th position in the 8th and final stage that from the legendary set of the movie Star Wars in the middle of nowhere brought the competitors to Monastir on the Mediterranean Sea.

The two CST Polaris Xtremeplus crews celebrated crossing the finish line. Competing and exploring a new country behind the wheels of the Polaris RZR Pro XP is part of the DNA of cross-country rallies in Side-by-Side. Then add a night spent in the desert with another crew around the fire, the adventure of finding the CAP and the direction to follow in the open desert, and the formula becomes a must, for all adventure seekers.

“It was an incredible adventure”, sums up the veteran Checco Tonetti, a very familiar face in the rally raids bivouacs. Sixth overall at the 2012 Dakar in South America in the quad category, 29th overall in the bike category (10th in the rookie standing) when the Dakar was still in Africa in 2004, Checco Tonetti has done several rallies on an international levels in Africa, South America and Middle East, but his passion is not limited to off-road. This year, for example, he won at Djion in France and was second at Le Castellet with a Brabham in the Formula Junior

“Eight days of race were a roller coaster of emotions. I was teaming up with Alberto Bertoldi, recently winner of the 2021 Transanatolia Rally, but also with Dakar participation. It was his first experience as co-driver so it required a bit of adaptation. We finished 22nd in the prologue in Djerba and this required that we had to attack going through the stage2 (Djerba – Ksar Ghilane 417km). We recovered many positions and eventually finished 8th. It was a though stage with a bit of WRC-style piste. Further into the stage the route was more technically challenging both in terms of navigation and driving skills”.

The natural oasis of Ksar Ghilane hosted the bivouac also for the 3rd and 4th stage.
“Sand, sand and more sand. This was on the menu with the small “dunettes” and the best that the Tunisian desert can offer”, continued Bertoldi, third on stage 3.
“The navigation was precise, and I have to say that Alberto (Bertoldi), my navigator, adapted really quickly to his new role as co-driver. Our Polaris equipped with CST tyres worked really well. We scored a provisional podium today, but I guess that without the navigation issues we had on day one we could have been on top”, continued Tonetti.

With a 7th position on stage 4, the Italian duo of the CST Polaris Xtremeplus team was aiming to a top 5 finish, also helped by the robust CST Apache tyres that made the difference of the different terrain of the Tunisian soil.

“It was a very fast stage and long stage (a loop of 287 km around the oasis of Ksar Ghilane ) where he kept a high average speed. We eventually finished 7th at only 8 minutes from the top”, stated  Alberto (Bertoldi), who did a very good job solving some tricky notes that made the navigation quiet challenging. The stage was fast but required a lot of concentration.

It was a good start also for the second CST Polaris Xtremeplus crew on the rally made by Andrea Tronconi and Giorgio Papa, two experienced rally-raids riders at their debut behind the wheel of the Polaris RZR Pro XP.

“I’m used to compete with the cars in circuits, but to double from 2 to 4 wheels in off road racing requires a bit of adaptation”, confessed Andrea Tronconi. “This year for example I competed in the Mini Challenge, but facing the prologue and the first stages we saw that we had to learn quickly to navigate in two in the desert because  when you are on a bike, the navigation is more visual and you decide on your own. In the cockpit of a Side by Side the perspective change and it’s a team work”, commented Tronconi. “The good thing is that we are enjoying this new experience”.

P20 in the Prologue, the duo improved gradually and the finished 12th on stage 3, 9thon stage 4.

“We hold into consideration a little bit of inexperience, some mechanical problems and some navigation mistakes, but gradually we improved and on SS4 we could sign a could result”, continued Tronconi. “On day 4 a loop of 287 km around the oasis of Ksar Ghilane challenged the competitors with all kind of tracks: small dunes and sandy stretches, but also lots of turns and twists but also fast tracks. Our Polaris Pro XP worked really well, and we could enjoy the dunes and the sandy paths. We made a great recovery and finished 9th at 21mon27 from the stage winner”.

The real adventure started on stage 5 (Ksar Ghilane – Douz | 255 km). As anticipated by the organizers, the fifth stage was supposed to be the toughest one because it was all about dunes and more dunes, sandy tracks mixed with more dunes. Both crews suffered some mechanical issues and spent the nights in the desert.

“SS5 featured sand, sand and more sand”, said Andrea Tronconi at the arrival at the bivouac the following morning. “Stage 5 was almost 100 per cent sand so all the problems were amplified. We had an issue with the suspension, and we were obliged to slow down.  We get stuck so many times. We also broke the belt. As the night arrived, we preferred to sleep in the desert and hit the road again this morning with the first morning light”.  Tronconi and Papa arrived at the bivouac in Douz at 5:30 am. Just the time for a warm shower and a big breakfast before taking the road for stage 6 that brought them to Star Wars. “Sleeping in the desert was a wise decision”, confessed Giorgio Papa, the navigator, “considered that this is our first rally with the Polaris. It was tough but for sure we have a real adventure to tell when we go back home”.

It was a though day and night also for Tonetti and Bertoldi.  They spent the night in the desert with the Xtremeplus assistance truck. “Adventure is part of the dna of rally raids and this is something to remember. We spent the night making shift to keep the fire alive as it was a cold night. We hit the road with the first morning lights. This delay spoiled also the following stage but from day 7 we were back on the right pace”, stated Tonetti.

Checco Tonetti and Alberto Bertoldi signed Stage 7 ( a loop of 262 kms apund Star Wars) with a super 5th place.  “It was a demanding stage with broken paths, oued, lots of bumps hard paths, and some fast tracks. Alberto, my navigator did a perfect job. The Polaris worked perfectly so we enjoyed the day. Considered the though terrain, we had to remain very focused. Regarding the route, after many days of dunes, we appreciated the Rommel Road, the famous road that takes the name from the General Erwin Rommel, known as “the desert fox”, said the Italian.

It was a positive day also for Andrea Tronconi and Giorgio Papa, 22nd. “We are satisfied because we finished the stage. We had again some mechanical issue, so we lost some time but we managed to arrive till the end.  This was our goal today and we made it“.

The last day saw the two CST Polaris Xtremeplus crews crossing the finish line of the Tunisia Challenge Desert in Monastir on the Mediterranean Sea.
The stage was relatively short, 137 km, but though for the technical navigation and the broken terrain that challenged the drivers and the vehicles till the end.

The Italian duo Checco Tonetti and Alberto Bertoldi crossed the finish line of the 8th and final stage 4th, 22nd in general.  “It is a great satisfaction. The last stage was full of surprises, so it was mandatory to maintain the concentration high”, said Tonetti.  “There was a mix of wide and fast tracks alternated with winding and narrower sections. Alberto, my co-driver, did again a beautiful job. The machine worked really well and I have to say that the CST Apache tyres made the difference throughout the whole rally. They proved to be very flexible and robust facing the dunes as well as the mountain paths.
It is a pity for the two days spent in the desert, otherwise we could have finished in the top 5 in the general ranking”.

“We finished a bit back, but we finished in style”, said a satisfied Andrea Tronconi, 14th on day 8, 24th in the general. “All in all, it was a very positive experience. We enjoy it and we would like to thank the Xtremeplus team”.

The podium ceremony before the tradition party was particularly emotional after eight race days and 2,800 kms. 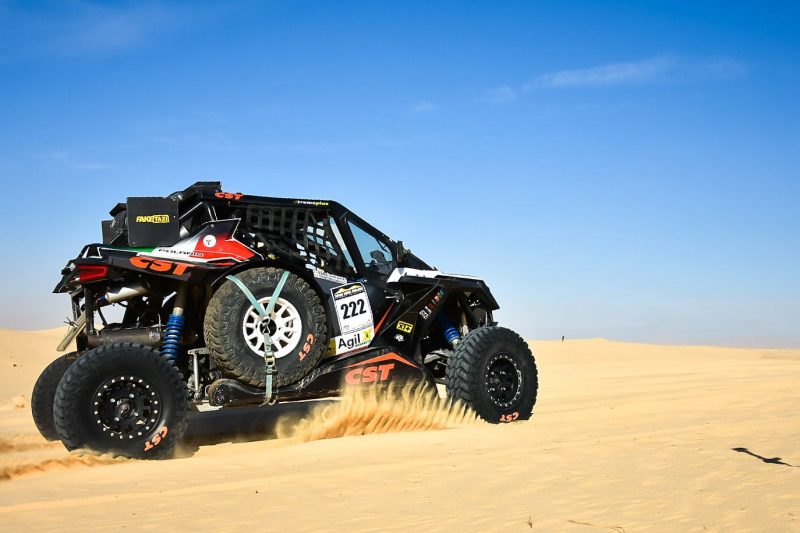 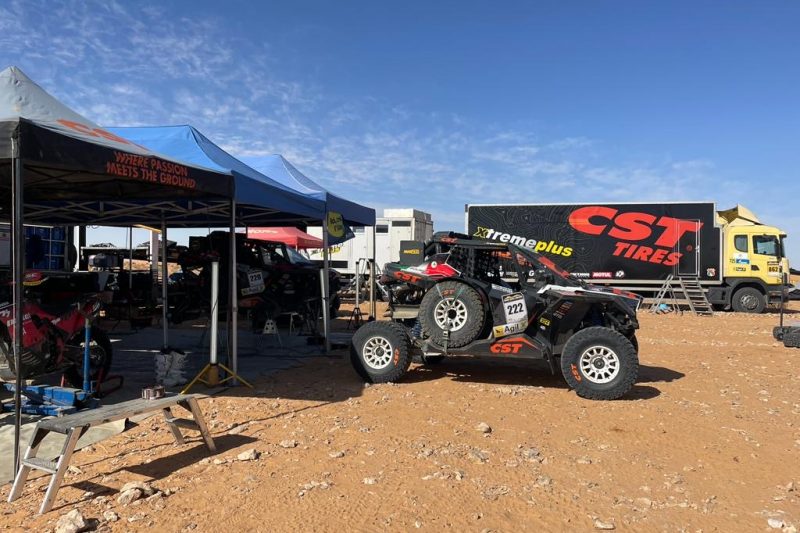 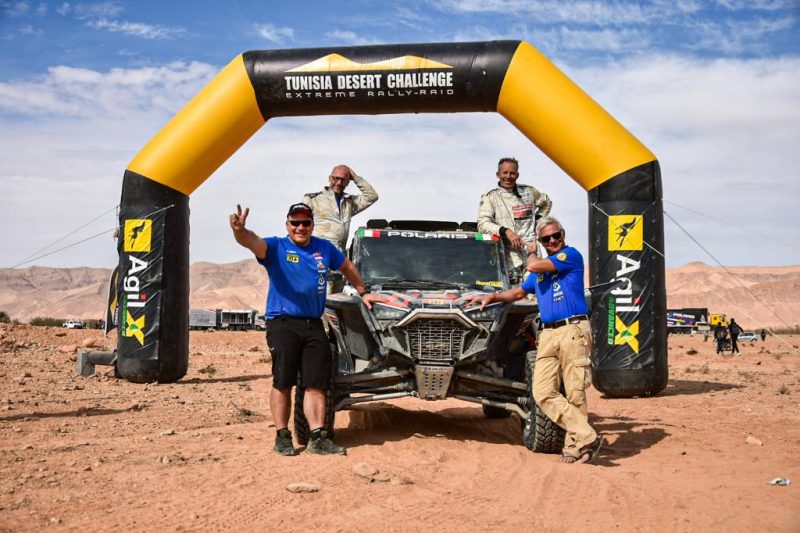