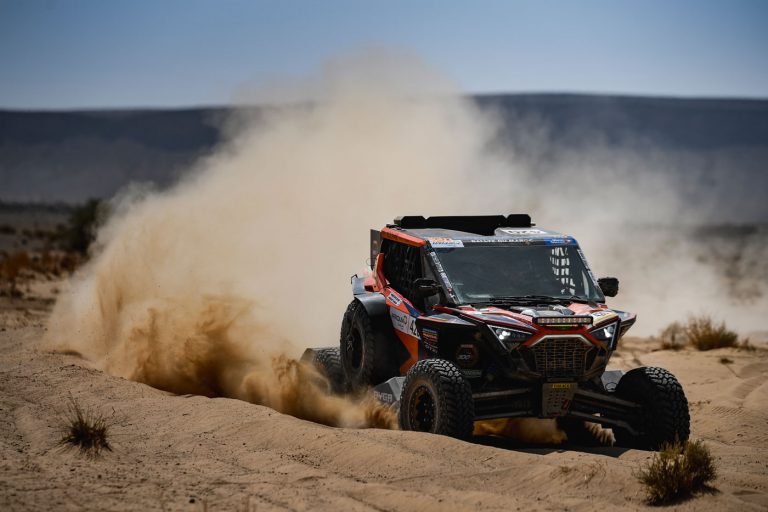 There were a lot of expectations for the 2021 edition of the Morocco Rally in which all the factory and top teams started  with a record number of 160 bikes and 100 cars. The rally featured 5 special stages, 1,633 kilometers of timed section for a total of 2,656 kilometers. The route this year has been conceived in the form of loops around Zagara in the Drâa-Tafilalet region to enable a smooth running of the rally.

The Morocco Rally is considered as the most important test in preparation for the Dakar. The terrain in fact is very similar to Saudi Arabia, that in January will host the Dakar Rally for the third year.

In this years edition there were 4 Xtreme Plus teams:

More info about the riders:

“Gaspari / Salvatore competed as the CST crew. For both Enrico and Massimo, this is the first year on a SSV. Together they have competed with us the Andalusia Rally, the Kazakhstan and the Silk Way,  their target is to continue to gain experience to participate to the Cross Country world rally championship in 2022.

“Pena / Tornabel are a very experienced duo. T3 world champion in 2018, Jose Luis Pena, is currently third in the FIA overall ranking and he will keep on fighting aiming at a podium finish in the championship.

“The Morocco rally was  the first race after the 2021 Dakar for Guyasamin and  Torlaschi. The target for this young crew is to regain the pace.

Aged 70, Graham Knight continues to surprise us and it’s an incredible boost of energy for all of us. He finished the 2021 Dakar and he is ready for a new adventure.

After 5 incredible stages 3 out 4 teams finished the rally.

We would like to congratulate Jose Luis and Rafael for the 3rd place: once again the experienced duo confirmed that consistency and not only speed is the winning key in the rally. Jose Luis showed a consistent pace, he was able to manage the car and the tyres even in the most demanding stages that featured rocks and sand alternated. This result is also important for the FIA championship.

Enrico Gaspari and Massimo Salvatore of the CST Polaris team, tested some development during the rally. “We are satisfied for the improvements we had in the areas of the gearbox, the suspensions, and shock absorbers. We also tested a new position for the spare tyres, but it didn’t give us the results we expected. Regarding the race, I was sorry for Enrico because he has been sick for 2 days. He took the start and was determined to finish the race, as he did, but he couldn’t push as he wanted. Anyway, this is his first year on the SSV and this week he had a great opportunity to continue the understanding of the machine and gaining experience. They finished 7th in the T3 category”.

Sebastian Guayasamin and Ricardo Torlaschi were also in the fight aiming at a top 10 finish in the T4 category. Unfortunately in stage 4, the hardest of the rally for the rocks and stones, they broke the chassis in a way that wouldn’t be safe to repair, so the duo couldn’t take the start of the last stage.

In the same category the team lined up are also Graham Knight and David Watson. “They are true passionate and their enthusiasm is contagious. Their target is to enjoy the race. We can say: mission accomplished because both Graham and David were satisfied. Morocco offers an incredible landscape and the 5 stages were technical and varied”.

Regarding the rally, team manager of Xtreme Plus Marco Piana underlined what makes the Rallye du Maroc so unique. “From the Atlas mountains to the dunes of the Erg Chebbi and Erg Chegaga, in 300 km you have all kind of terrain that competitors can find on the Dakar Rally. This makes Morocco so special. These are the most difficult conditions for the tires and also a lot of stress for the machine. In terms of tires, you need to play with the pressure or find a compromise that can fit both situations (sand and rocks). It’s quiet challenging, this is why it is so important for us to have a partner like CST tires. The CST Apache tires are robust and safe. This makes the difference in the stage, said Piana, founder of the Xtremeplus team in 2004.